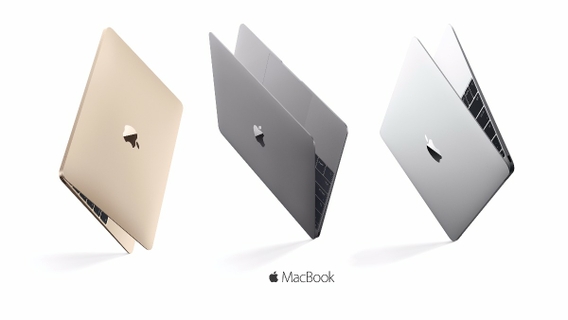 The New MacBook: Light. Years ahead.

Apple's with MacBook was to do the impossible: engineer a full‑size experience into the thinnest, lightest Mac notebook yet. And not only is it compact — it’s more powerful than ever. The new MacBook delivers up to 20 percent faster performance with new seventh‑generation Intel Core and up to 50 percent faster SSD storage.

More Muscle in Every Millimeter

Now equipped with seventh-generation Intel Core processors, MacBook is snappier than ever. From daily tasks like launching apps and opening files to more advanced computing, you can power through your day thanks to faster SSDs and Turbo Boost processing up to 3.6GHz.

We designed MacBook to be not only thinner and lighter, but more functional and intuitive than ever before. To do that, we couldn’t just shave a millimeter here, a gram there. So we started from scratch, reinventing each essential element as part of a singular, deceptively simple design. It’s everything there is to love about Mac. In its purest form ever. 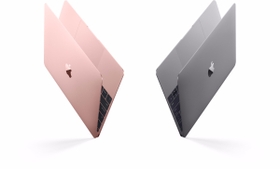 A keyboard reimagined from A to Z

From the beginning, our goal was to design a full, uncompromising Mac experience. And a full-size keyboard is an essential part of that. In order to fit a full-size keyboard in the incredibly thin MacBook, we designed the keyboard from the ground up. Each component has been rethought, from the underlying mechanism to the curvature of the surface of each key to the distinctive new typeface. The result is a keyboard dramatically thinner than its predecessor. Now when your finger strikes the key, it goes down and bounces back with a crisp, consistent motion that makes typing with precision a breeze.

The Force Touch trackpad. Press a little deeper, do a lot more

The Force Touch trackpad may look like other trackpads on the surface, but underneath it’s unlike anything that’s existed before. Force sensors detect how much pressure you’re applying, and the new Taptic Engine provides a click sensation when you press anywhere on the surface. Now the click that once was a single, mechanical function is just the start of what you can do with Force Touch. The sensory capabilities of the Force Touch trackpad allow you to tell your MacBook what you want it to do based on subtle differences in the amount of pressure you apply. This makes it possible to perform a variety of different actions in different apps, all on the same surface. And it can respond with haptic feedback you can actually feel, making your MacBook more usable and personal than ever before. 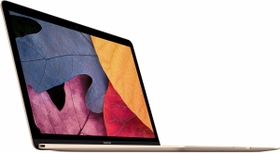 We squeezed the most into it. And out of it

Each component inside MacBook has been meticulously designed to get the most out of an incredibly thin and light enclosure. We chose the latest, most efficient processors, coupled with fast Intel HD Graphics 515, and optimized OS X to draw on the processor using as little power as possible. Because no fan is needed to cool the computer, it runs silently and without any moving parts, and it has more room for battery cells to provide all-day performance.1

Innovation on every level

To achieve all-day battery life, we needed to use every millimeter of space inside the slim MacBook enclosure. Traditional rectangular batteries leave unused space when placed in a curved enclosure, so we created a new type of battery technology that allowed for an innovative terraced battery cell, custom shaped to fit the specific contours of the enclosure. The result is 35 percent more battery cell capacity than would have been possible before. So all the available space in the enclosure is used, and you have all the battery life you need to get you through the day.The battery cells in MacBook are not only designed with enormous attention to detail, but are also assembled with extreme precision and care. High-speed cameras first take detailed photos of both the casing and the battery. We use those photos to account for microscopic variations in each enclosure, and carefully place the batteries so that not a single millimeter of space is wasted.

USB-C. One port. A world of connections

To create a notebook as thin and light as MacBook, we had to strive for efficiency in every detail, right down to how it connects to peripherals and power. The multifunction USB-C port is a new universal connectivity standard that combines the essential functions you need every day in one small, reversible port. 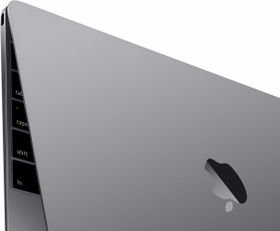 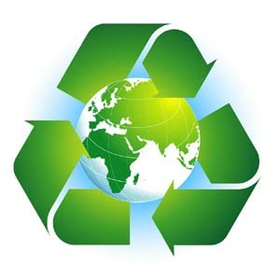 Each aspect of your MacBook — from the Retina display to the terraced battery to the advanced technologies of OS X — has been optimized to be as energy efficient as possible, with a typical energy consumption of 10.10 kWh per year. It also exceeds the low power requirements set by the EPA, giving it ENERGY STAR 6.1 qualification. And because the MacBook battery requires less frequent charging, it leaves a smaller carbon footprint from day-to-day use

Order between 7AM & 5PM and get it delivered in 4 hours. Order after 5PM & get it the next morning before 12PM. 2.500 KD delivery charge applies. See Terms & Conditions.